Consider this random experiment. You ask people (one at a time) of their birthdays (month and day only). The process continues until there is a repeat in the series of birthdays, in other words, until two people you’ve surveyed share the same birthday. How many people you have to ask before finding a repeat? What is the probability that you will have to ask

In the problem at hand, we ignore leap year and assume that each of the 365 days in the year is equally likely to be the birthday for a randomly chosen person. The birthday problem is typically the following question. How many people do we need to choose in order to have a 50% or better chance of having a common birthday among the selected individuals?

The random experiment stated at the beginning can be restated as follows. Suppose that balls are randomly thrown (one at a time) into

cells (e.g. boxes). The random process continues until a ball is thrown into a cell that already has one ball (i.e. until a repeat occurs). Let

First, we start with the birthday problem. The key is to derive the probability that in a group of

randomly selected people, there are at least two who share the same birthday. It is easier to do the complement – the probability of having different birthdays among the group of

people. We call this probability

. The reasoning for the first line is that there are 365 choices to be picked in the first selection. Each subsequent random selection has to avoid the previous birthday, thus 364 choices for the second person and only

To answer the birthday problem, just plug in values of

until reaching the smallest

. The calculation should be done using software (Excel for example). The smallest

The benefit of (1) extends beyond the birthday problem. Let’s consider the case for

with replacement until a number is chosen twice (until a repeat occurs). Similarly, let

be the probability that in

draws all chosen numbers are distinct. The probability

is obtained by replacing 365 with

Formula (2) will be useful in the next section.

We now look into the random variable discussed at the beginning, either the one for picking people at random until a repeated birthday or throwing balls into cells until one cell has two balls. To illustrate the idea, let’s look at an example.

be the number of rolls to obtain the repeated value. Find the probability function

is the probability that it will take

rolls to get a repeated die value.

rolls are distinct and the last roll must be one of the previous values.

be defined as above, i.e. the number of balls that are required to obtain a repeat. The following gives the probability

The reasoning is similar to Example 1. To get a repeat in throwing

occupied cells. For the first

balls to go into different cells, there are

cells for the last ball to land. Thus the product of these two quantities is in the numerator of (3).

Once the probability function (3) is obtained, the mean

can be derived accordingly. For the case of

(calculated by programming the probability function in Excel). On average it will be required to sample about 25 people to obtain a repeated birthday.

Another interesting quantity is

. This is the probability that it will take throwing more than

balls to get a repeat. Mathematically this can be obtained by first calculating

by summing the individual probabilities via (3). This is a workable approach using software. There is another way that is more informative. For the event

to happen, the first

throws must be in different cells (no repeat). The event

throws of balls. This is how the random variable

is linked to the birthday problem since the probability

should agree with the probability

Back to The Birthday Problem

Consider the case for

. What is the median of

? That would be the median number of people surveyed to obtain a pair of identical birthday. The median of

would be the least

in (1). The above calculation shows that

. Thus the median of

is 23. Thus when performing the random sampling of surveying birthday, about half of the times you can expect to survey 23 or fewer than 23 people.

. A little more broadly, the birthday problem is connected to the percentiles of the variable

. In contrast, the mean of

. The following lists several percentiles for the random variable 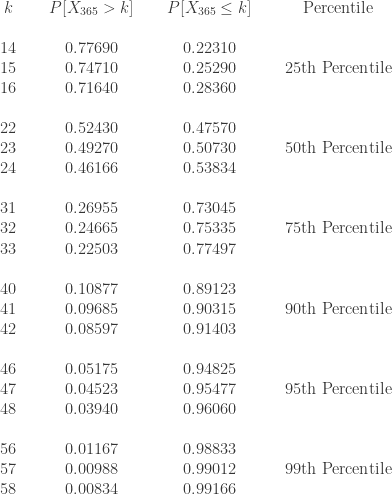 It is clear that in a group of 366 people, it is certain that there will be at least one repeated birthday (again ignoring leap year). This is due to the pigeon hole principle. As the percentiles in the above table shows, you do not need to survey anywhere close to 366 to get a repeat. The median is 23 as discussed. The 75th percentile of

For a further demonstration, we simulated the random variable

. The median of the 10,000 simulated results is 23. The following table summarizes the results. 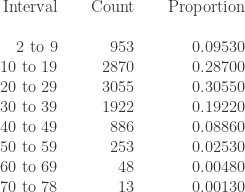