is the ratio of the circumference of a circle to its diameter. It is an irrational number. This means that the decimal expansion of

never ends and never repeats. Any decimal representation of

with just a finite number of decimal places written out is an approximation.

In any calculation involving

, the more decimal places, the more precise the computation will be. Approximations of

has been successfully calculated to over 22 trillions decimal places, or 22,459,157,718,361 decimal places to be exact (see here). If 15 or 16 digits are good enough for space travel, why the fascination with

than we will ever need for practical applications on Earth or in space?

Jumping on the pi band wagon could be all about pi mania. People had been fascinated with

since antiquity. In our contemporary society, a day is set aside to celebrate the number pi. Actually two days are set aside – March 14 (3.14) and July 22 (based on 22/7 as an approximation), even though the first one is more well known than the second one. There are plenty of other well known special numbers. But I have never heard of a Natural Log Constant Day or Square Root of 2 Day.

There are indeed some special needs for

that require billions or more digits. One is that

is used in testing computer precision. The other is that digits of

are sometimes used as random digits generator. Even such uses speak more of pi mania than the natural and intrinsic qualities of the pi since other special numbers can instead be used for these purposes.

could not be any digit other than 1. Instead, we should ask a different question.

Are the decimal digits of

uniformly distributed? In other words, does every digit (from 0 to 9) in the decimal expansion of

appear one-thousandth of the time and so on? If that is the case, we would say

is a normal number in base 10.

normal in the base 10? In Base 2? In base 16 (hexadecimal)? There are a great deal of empirical evidences that the digits of

behave like a normal number in base 10. The following table is the tabulation of the first 10 millions digits of

Note that the frequencies are basically 1,000,000 plus or minus a few hundreds. So each digit appears 10% of the time among the first 10 million digits of

. This is also confirmed by a chi-squared test (see below). Here is another statistical analysis of the first 10 million of digits of 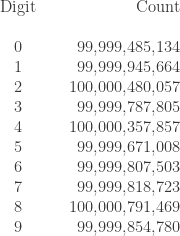 The first trillion digits of

The calculation of 22.4 trillion digits of

were completed in November 2016. Subsequently, statistical analysis had been performed on these 22.4 trillion decimal digits of

(abstract and paper). The analysis is another empirical check for normality of

. In this analysis, the frequencies of the sequences with length one, two and three in the base 10 and base 16 representations are examined. The conclusion is that the evaluated frequencies are consistent with the hypothesis of

a normal number? The empirical evidences, though promising, are not enough to prove that

is a normal number in base 10 or in any other base. Though many mathematicians believe that

is a normal number in base 10 and possibly other bases, they had not been able to find mathematical proof. It is also not known whether any one of the other special numbers such as natural log constant

or other irrational numbers such as

is a normal number is a profound and unsolved classic problem in probability. If

is a normal number, even just in base 10, the implication would be quite interesting. If

is a normal number in base 10, the sequence of decimal digits of

than the current world record of 22.4 trillion digits.

One practical consideration of using digits of

as random numbers is the issue of computational speed. For large scale simulation needs, computing fresh digits of

will take considerable amount of time. It took 105 days to compute the current world record of 22.4 trillion digits of

. The verification took 28 hours (see here). It is clear that the digits of

are harder and harder to come by as more and more digits had been obtained.

The number pi is a fascinating mathematical object. It has something for everyone, from the practical to the fanciful and to the mysterious. On the practical side, it has a precise mathematical meaning as it describes the relationship between circumference of a circle and its diameter. It helps solved practical problems here on Earth and in space. It also exhibits random behavior that is hinted at in this post. It is a mysterious thing that captures the imagination from young students to professional mathematicians. Proving that pi is a normal number may not even easy. Everyone wants to uncover more secrets about the number pi.

are consistent with a uniform distribution.

For Table 2, the chi-squared statistic is 14.97246681 with 9 degrees of freedom (df = 9). The p-value is 0.091695048. The p-value is still large, though not as large as the one for Table 1. At level of significance 0.01, we do not reject the null hypothesis. There is still reason to believe that the frequencies of the digits in the first trillion digits of

2 thoughts on “Are digits of pi random?”