This post discusses the problem of the gambler’s ruin. We start with a simple illustration.

Two gamblers, A and B, are betting on the tosses of a fair coin. At the beginning of the game, player A has 1 coin and player B has 3 coins. So there are 4 coins between them. In each play of the game, a fair coin is tossed. If the result of the coin toss is head, player A collects 1 coin from player B. If the result of the coin toss is tail, player A pays player B 1 coin. The game continues until one of the players has all the coins (or one of the players loses all his/her coins). What is the probability that player A ends up with all the coins?

Intuitively, one might guess that player B is more likely to win all the coins since B begins the game with more coin. For example, player A in the example has only 1 coin to start. Thus there is a 50% chance that he/she will lose everything on the first toss. On the other hand, player B has a cushion since he/she can afford to lose some tosses at the beginning.

Simulated Plays of the Game

One way to get a sense of the winning probability of a player is to play the game repeatedly. Rather than playing with real money, why not simulate a series of coin tosses using random numbers generated in a computer? For example, the function =RAND() in Excel generates random numbers between 0 and 1. If the number is less than 0.5, we take it as a tail (T). Otherwise it is a head (H). As we simulate the coin tosses, we add or subtract to each player’s account accordingly. If the coin toss is a T, we subtract 1 from A and add 1 to B. If the coin toss is an H, we add 1 to A and subtract 1 from B. Here’s a simulation of the game.

In the first simulation, player A got lucky with 4 heads in 5 tosses. The following shows the next simulation.

Player A seems to be on a roll. Here’s the results of the next two simulated games.

Now player A loses both of these games. For good measure, we show one more simulation.

This one is a little more drawn out. Several tosses of tail in a row spells bad news for player A. When a coin is tossed long enough, there bounds to be some runs of tails. Since it is a fair coin, there bounds to be runs of head too, which benefit player A. Wouldn’t the runs of H cancel out the runs of T so that each player wins about half the time? To get an idea, we continue with 95 more simulations (to get a total of 100). Player A wins 23 of the simulated games and player B wins 77 of the games. So player A wins about 25% of the times. Note that A owns about 25% of the coins at the start of the game.

Ten Simulated Runs of 100 Games Each 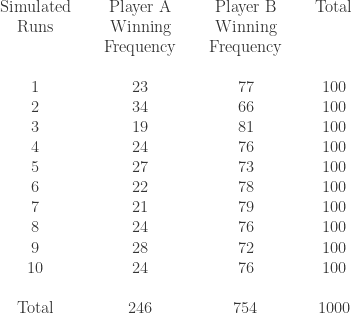 The simulated runs fluctuate quite a bit. Player A wins any where from 19% to 34% of the times. The results are no where near even odds of winning for player A. In the 1,000 simulated games, player A wins 24.6% of the times, roughly identical to the player A’s share of the coins at the beginning. If the simulation is carried many more times (say 10,000 times or 100,000 times), the overall winning probability for player A would be very close to 25%.

Here’s a slightly more general description of the problem of gambler’s ruin.

Two gamblers, A and B, are betting on the tosses of a fair coin. At the beginning of the game, player A has

coins and player B has

coins. So there are

.
The long run probability of player B winning all the coins is

The 99.999% chance of losing everything is based on the assumption that all bets are at even odds. This is certainly not the case in a casino. The casino enjoys a house edge. So the losing probabilities would be worse for a gambler playing in a casino.

We derive the winning probability for a more general case. The coin that is tossed does not have to be a fair coin. Let

be the probability that the coin toss results in a head. Let

. Suppose that there are

coins initially between player A and player B.

be the probability that player A will own all the

coins when player A starts the game with

coins. On the other hand, let

be the probability that player B will own all the

coins when player A starts the game with

The goal here is to derive expressions for both

and to show that

. The last point, though seems like common sense, is not entirely trivial. It basically says that the game will end in finite number of moves (it cannot go on indefinitely).

Another point to keep in mind is that we can assume

. In the following derivation,

is the event that the first toss is a head and

is the event that the first toss is a tail.

. First condition on the outcome of the first toss of the coin.

. If the first toss is a head, then player A has

coins and player B would have

Further derivation can be made on equation (2).

Plugging in the values 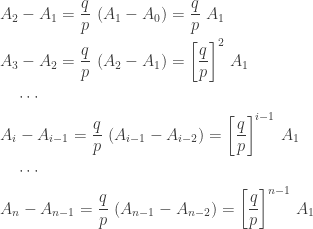 There are two cases to consider. Either

and the second case means

. The following is an expression for

for the two cases.

The above two-case expression for

gives the following expression for

in (6) is applicable for

. For the case of

, the probability of player A owning all the coin is the ratio of the initial amount of coins of player A to the total number of coins, identical to what is stated in the previous section. Recall that

coins and player B has

coins. By symmetry, the following gives the expression for

, which is equivalent to

, it is clear that

, the following shows that 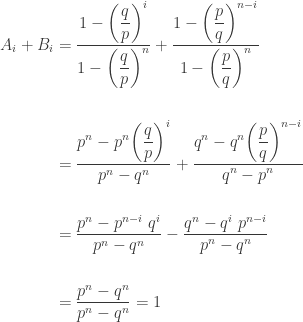 shows that the gambling game discussed here has to end after certain number of plays and that it will not continue indefinitely.

The formulas derived here are quite profound, not to mention impactful and informative for anyone who gambles. More calculations and discussion can be found here in a companion blog on statistics.

7 thoughts on “The gambler’s ruin problem”