I recently gave an exam in my statistics course, which turned out to be an excellent example for the matching problem, a classic problem in probability. There were 66 students taking the test. I wrote down the names of the students in the order of turning in the exam. The following table shows the positions of the students in alphabetical order and in the order they turned in the exam.

This example captures the essence of a classic problem in probability called the matching problem. There are many other colorful descriptions of the matching problem. All of them involve the pairing of two orderings on a set of objects. We have a set of objects or items that are ordered in some natural way. Then we scramble the items randomly (or according to some ordering that is unpredictable in advance). Whenever an item has the same position in both the original order and in the scrambled order, it is called a match.

In our exam example, one version of the matching problem asks: what is the probability that there is at least one student that is a match?

In fact, in matching two orderings, such as the one described here, a match happens more often than not. The probability of having at least one match is roughly 0.63. Specifically, when

is the number of students taking the exam, the probability of finding at least one match approaches

. The derivation of this probability is based on the inclusion-exclusion principle and is discussed in the blog post called The Matching Problem.

(the number of items), the probability converges to

pretty rapidly. Thus for all practical purposes, we can say that the probability of having at least one match is 0.63 (roughly two-third), whenever the number of items involved in the random scrambling is reasonably large (as in the 66 students taking the exam).

is any integer from

is derived in the blog post called More About the Matching Problem.

is approximated by the Poisson distribution with parameter

The following are the first 4 probabilities of

Another interesting observation is that if a match occurs, it is mostly likely that there is only one match (such as the example discussed here).

There are many colorful descriptions of the matching problem. The possibilities are limitless. One example is that of

married couples going to a ball room dancing class. The instructor randomly assign the ladies to the gentlemen as dancing partners. A match occurs if a wife is assigned as
the dancing partner of her husband.

A previous blog post (Tis the Season for Gift Exchange) presents an example involving gift exchange. Each person attending a party brings a gift for gift exchange. The gifts are put in a pile and each person randomly selects a gift from the pile. A match occurs if a person selects his or her own gift.

In another blog post (A lazy professor who lets students do their own grading), a professor randomly returns quizzes to the students for grading. A match occurs if a students is assigned his or her own quiz.

After reading the example discussed here, any professor or instructor who is contemplating randomly distributing quizzes back to the students for grading perhaps should reconsider the idea! This is one of several posts discussing the matching problem. Go to the end of this post to find links to these previous posts.

Consider the following problem. Suppose that a certain professor is lazy and lets his students grade their own quizzes. After he collects the quizzess from his

students, he randomly assigns the quizzes back to these

students for grading. If a student is assigned his or her own quiz, we say that it is a match. We have the following questions:

The above problem is called the matching problem, which is a classic problem in probability. In this post we solve the last question indicated above. Though the answer is in terms of the total number of quizzes

, it turns out that the answer is independent of

. Thus if the professor assigns the quizzes randomly, it will be very unusual that there is no match.

The last question above is usually stated in other matching situations. One is that there are

couples (say, each couple consists of a husband and a wife) in a class for ballroom dancing. Suppose that the dance instructor randomly matches the men to the ladies. When a husband is assigned his own wife, we say that it is a match. What is the probability that there is at least one couple that is a match?

The key to answering this question is the theorem stated in Feller (page 99 in chapter 4 of [1]). We state the theorem and make use of it in the solution of the last question above. A sketch of the proof will be given at the end. For ideas on the solutions to the first three questions above, see this previous post.

that are defined on the same sample space, we have the following formula:

Note that in the general term

, the sum is taken over all increasing sequence

, we have the following familiar formulas:

be the even that the

student is assigned his or her own quiz by the professor. Then

is the probability that there is at least one correct match.

. This is the case since we let the

student be fixed and we permute the other

, since we fix the

students and let the other

students permute. In general, whenever

distinct integers and are increasing, we have:

We now apply the formula (1). First we show that for each

many ways to have

Applying the formula for the union of

The above limit converges quite rapidly. Let

. The following table lists out the first several terms of this limit.

is counted in exactly one time in the right hand side of (1). Suppose that a sample point is in exactly

. Then the following shows the number of times the sample point is counted in each expression:

Thus the sample point in question will be counted exactly

times in the right hand side of the formula.

The following is the derivation that

More About the Matching Problem

Tis the Season for Gift Exchange

Suppose that there are 10 people in a holiday party with each person bearing a gift. The gifts are put in a pile and each person randomly selects one gift from the pile. In order not to bias the random selection of gifts, suppose that the partygoers select gifts by picking slips of papers with numbers identifying the gifts. What is the probability that there is at least one partygoer who ends up selecting his or her own gift? In this example, selecting one’s gift is called a match. What is the probability that there is at least one match if there are more people in the party, say 50 or 100 people? What is the behavior of this probability if the size of the party increases without bound?

The above example is a description of a classic problem in probability called the matching problem. There are many colorful descriptions of the problem. One such description is that there are

married couples in a ballroom dancing class. The instructor pairs the ladies with the gentlemen at random. A match occurs if a married couple is paired as dancing partners.

Whatever the description, the matching problem involves two lists of items that are paired according to a particular order (the original order). When the items in the first list are paired with the items in the second list according to another random ordering, a match occurs if an item in the first list and an item in the second list are paired both in the original order and in the new order. The matching problem discussed here is: what is the probability that there is at least one match? Seen in this light, both examples described above are equivalent mathematically.

We now continue with the discussion of the random gift selection example. Suppose that there are

people in the party. Let

be the event that the

person selects his or her own gift. The event

is the event that at least one person selects his or her own gift (i.e. there is at least one match). The probability

is the solution of the matching problem as described in the beginning. The following is the probability

is obtained by using an idea called the inclusion-exclusion principle. We will get to that in just a minute. First let’s look at the results of

for a few iterations. 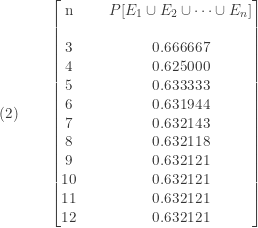 In a party with random gift exchange, it appears that regardless of the size of the party, there is a very good chance that someone will end up picking his or her own gift! A match will happen about 63% of the time.

It turns out that the answers in

are related to the Taylor’s series expansion of

. We show that the probability in

will always converge to

. Note that the Taylor’s series expansion of

Consequently, the Taylor’s series expansion of

Note that the sum of the first

is the probability in

. As the number of partygoers

will be closer and closer to

says that it does not matter how many people are in the random gift exchange, the answer to the matching problem is always

in the limit. The equation

says that the probability of having no matches approaches

. There is a better than even chance (

to be more precise) that there is at least one match. So in a random gift exchange as described at the beginning, it is much easier to see a match than not to see one.

We now want to give some indication why

provides the answers. The inclusion-exclusion principle is a formula for finding the probability of the union of events. For the union of two events and the union of three events, we have:

To find the probability of the union of

events, we first add up the probabilities of the individual events

. Because the resulting sum overshoots, we need to subtract the probabilities of the intersections

. Because the subtractions remove too much, we need to add back the probabilities of the intersections of three individual events

. The process of inclusion and exclusion continues until we reach the step of adding/removing of the intersection

. The following is the statement of the inclusion-exclusion principle.

is the sum of all probabilities

is the sum of all possible probabilities of the intersection of three events and so on.

We now apply the inclusion-exclusion principle to derive equation

is the event that the

person gets his or her own gift while the other

people are free to select gifts. The probability of this event is

many ways of fixing 1 gift. So

Now consider the intersection of two events. The event

is the event that the

person get their own gifts while the other

people are free to select gifts. The probability of this event is

many ways of fixing 2 gifts. So

By the same reasoning, we derive that

and so on. Then plugging

, we obtain the answers in

The matching problem had been discussed previously in the following posts.

Mote about the matching problem