is the base of the natural logarithm. It is an important constant in mathematics, which is approximately 2.718281828. This post discusses a charming little problem involving the the number

. This number can be represented in many ways. In a calculus course, the number

may be defined as the upper limit of the following integral:

Another representation is that it is the sum

. Still another is that it is the limit

. According to the authors of a brief article from the Mathematics Magazine [1], these textbook definitions do not give immediate insight about the number

(article can be found here). As a result, students come away from the course without a solid understanding of the number

is. Instead, the article gives six probability oriented ways in which the number

can occur. These occurrences of

are more interesting and, according to the authors of [1], can potentially increase students’ appreciation of the number

. In two of these six examples (Example 2 and Example 5), the number

is defined by drawing random numbers from the interval

. Randomly and successively select numbers from the interval

. The goal here is to give a proof of this result.

As illustration, the experiment is carried out 1 million times using random numbers that are generated in Excel using the Rand() function. The following table summarizes the results. 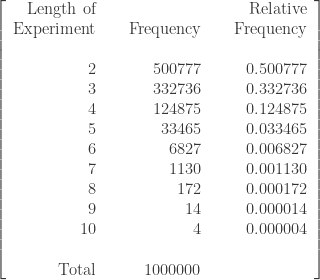 The average length of experiment in these 1 million experiments is 2.717001. Even though the rate of convergence to the number

is fairly slow, the simulated data demonstrates that on average it takes approximately

number of simulations of numbers in the unit interval to get a sum that exceeds 1.

be defined as follows:

The objective is to determine

. On the surface, it seems that we need to describe the distribution of the independent sum

. Doing this may be possible but the result would be messy. It turns out that we do not need to do so. We need to evaluate the probability

. This is accomplished by an induction proof. This is true for

is a uniform distribution. Suppose (2) holds for the integer 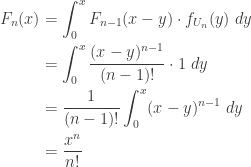 The above derivation completes the proof of the claim. We now come back to the problem of evaluating the mean of the random variable

if and only if

. So we have the probability statement

As a result, the following is the probability function of the random variable 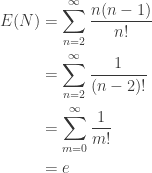 With the above derivation, the proof that

2.718281828… is the average number of random numbers to select in order to obtain a sum that exceeds 1 is completed.

We motivate the discussion with the following example. The notation

denotes the statement that

has a binomial distribution with parameters

is the number of successes in a sequence of

is the probability of success in each trial.

Example 1
Suppose that a student took two multiple choice quizzes in a course for probability and statistics. Each quiz has 5 questions. Each question has 4 choices and only one of the choices is correct. Suppose that the student answered all the questions by pure guessing. Furthermore, the two quizzes are independent (i.e. results of one quiz will not affect the results of the other quiz). Let

be the number of correct answers in the first quiz and

On the face of it, the example is all about binomial distribution. Both

are binomial distributions (both

is also a binomial distribution (

). The question that is being asked is a conditional probability, i.e.,

Here’s how to think about the problem. This student took the two quizzes and was given the news by the instructor that she had 4 correct answers in total. She now wonders what the probability of having 3 correct answers in the first quiz is. The thought process is this. She is to pick 4 questions from 10 questions (5 of them are from Quiz 1 and 5 of them are from Quiz 2). So she is picking 4 objects from a group of two distinct types of objects. This is akin to reaching into a jar that has 5 red balls and 5 blue balls and pick 4 balls without replacement. What is the probability of picking 3 red balls and 1 blue ball? The probability just described is from a hypergeometric distribution. The following shows the calculation.

We will show below why this works. Before we do that, let’s describe the above thought process. Whenever you have two independent binomial distributions

with the same probability of success

(the number of trials does not have to be the same), the conditional distribution

is a hypergeometric distribution. Interestingly, the probability of success

has no bearing on this observation. For Example 1, we have the following calculation.

, while the unconditional mean

. The fact that the conditional mean is higher is not surprising. The student was lucky enough to have obtained 4 correct answers by guessing. Given this, she had a greater chance of doing better on the first quiz.

and they are independent. The joint distribution of

has 36 points in the sample space. See the following diagram.

The probability attached to each point is

involves 5 points as indicated in the following diagram.

and work out the calculation. But

is actually equivalent to the following because

As stated earlier, the conditional probability

cancel out, we have:

and they are independent. Then

is also a binomial distribution, i.e.,

. Suppose that both binomial experiments

have been performed and it is known that there are

successes in total. Then

has a hypergeometric distribution.

As discussed earlier, think of the

as red balls and think of the

as blue balls in a jar. Think of the

successes as the number of balls you are about to draw from the jar. So you reach into the jar and select

balls without replacement. The calculation in

gives the probability that you select

The probability of success

How to pick binomial trials