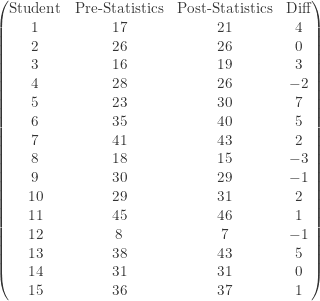 What kind of significance tests do we use for doing inference on the mean of an obviously non-normal population? If the sample is large, we can still use the t-test since the sampling distribution of the sample mean

is close to normal and the t-procedure is robust. If the sample size is small and the underlying distribution is clearly not normal (e.g. is extremely skewed), what significance test do we use? Let’s take the example of a matched pairs data problem. The matched pairs t-test is to test the hypothesis that there is “no difference” between two continuous random variables

that are paired. If the underlying distributions are normal or if the sample size is large, the matched pairs t-test are an excellent test. However, absent normality or large samples, the sign test is an alternative to the matched pairs t-test. In this post, we discuss how the sign test works and present some examples. Examples 1 and 2 are shown in this post. Examples 3, 4 and 5 are shown in the next post
The sign test, more examples.

is a pair of continuous random variables. Suppose that a random sample of paired data

is obtained. We omit the observations

be the number of pairs for which

. For each of these

pairs, we make a note of the sign of the difference

be the number of

signs out of these

pairs. The sign test gets its name from the fact that the statistic

has a binomial distribution.

. Note that this is the probability that a data pair

, then any random pair

has an equal chance of being a

against any one of the following alternative hypotheses:

can be considered a series of

independent trials, each of which has probability of success

. Thus the binomial distribution is used for calculating significance. The left-tailed P-value is of the form

and the right-tailed P-value is

. Then the two-tailed P-value is twice the one-sided P-value.

The sign test can also be viewed as testing the hypothesis that the median of the differences is zero. Let

be the median of the differences

is equivalent to the hypothesis

. For the alternative hypotheses, we have the following equivalences:

Example 1
A running club conducts a 6-week training program in preparing 20 middle aged amateur runners for a 5K running race. The following matrix shows the running times (in minutes) before and after the training program. Note that five kilometers = 3.1 miles. 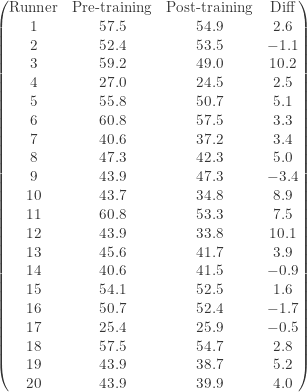 The difference is taken to be pre-training time minus post-training time. Use the sign test to test whether the training program improves run time.

For a given runner, let

be a random pre-training running time and

be a random post-training running time. The hypotheses to be tested are:

Under the null hypothesis

be the number of runners in the sample for which

. The observed value of the statistic

. Since this is a right-tailed test, the following is the P-value:

Because of the small P-value, the result of 15 out of 20 runners having improved run time cannot be due to random chance alone. So we reject

and we have good reason to believe that the training program reduces run time.

Example 2
A car owner is curoius about the effect of oil changes on gas mileage. For each of 17 oil changes, he recorded data for miles per gallon (MPG) prior to the oil change and after the oil change. The following matrix shows the data: 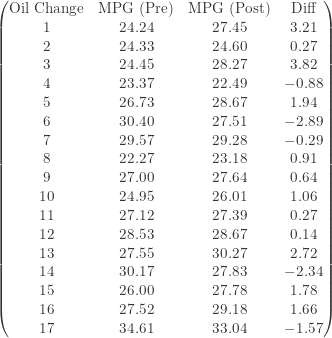 Regular oil changes are obviously crucial to maintaining the overall health of the car. It seems to make sense that oil changes would improve gas mileage. Is there evidence that this is the case? Do the analysis using the sign test.

In this example we set the hypotheses in terms of the median. For a given oil change, let

be the pre oil change MPG. Consider the differences

be the median of the differences

be the number of oil changes with positive differences in MPG (post minus pre). Then

. The observed value of the statistic

. Since this is a right-tailed test, the following is the P-value:

At the significance level of

, we reject the null hypothesis. However, we would like to add a caveat. The value of this example is that it is an excellent demonstration of the sign test. The 17 oil changes are not controlled. For example, the data are just records of mileage and gas usage for 17 oil changes (both pre and post). No effort was made to make sure that the driving conditions are similar for the pre oil change MPG and post oil change MPG (freeway vs. local streets, weather conditions, etc). With more care in producing the data, we can conceivably derive a more definite answer.